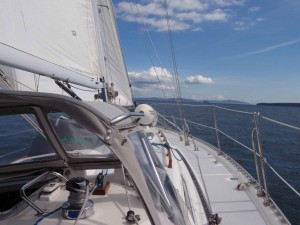 The Academy Awards were handed out last week and I was surprised that one of the powerful films of 2013 didn’t make it through the nominations. I thought “All Is Lost” might be nominated for Robert Redford’s acting or for its lush cinematography. I’m including it in my blog because of the existential themes that it presents.

“All Is Lost” – what an epic title! Perhaps you’ve felt that way surveying a complete train-wreck of a disappointment, or at the end of a business venture that didn’t work out. Maybe a relationship. “All Is Lost.” Dealing with loss/failure/disappointment is just one of the existential themes that’s presented by this movie, and I’ll be focusing on another theme later in this review.

But first, let’s back up a bit – If you haven’t seen the film, “All Is Lost” is a sailing, man-at-sea, stranded-survivor movie. The film’s only character, listed in the credits as “Our Man”, spends most of the film struggling against unexpected threatening events, each of which places him in increasingly dire circumstances. As the film progresses, we watch Our Man degrade from rested to exhausted, from hardy and competent to barely holding on, from a firmly set jaw to wailing at the sky with the most gut wrenching “Fffffuuuuuuuuuuckk” that I’ve ever heard/seen on screen. His living conditions also degrade as he downsizes from his comfortable Cal 39 yacht to a vinyl emergency raft. The film crew and director provide an amazingly realistic depiction of Our Man struggling to make things right, to hold on, to survive and live through terrible difficulties on an indifferent and sometimes violent sea. They do a powerful job of building tension as disaster progresses.

After the gut-wrenching wail, and after Our Man writes an “All Is Lost” letter and seals it in a glass jar that he sets afloat, the film takes a fresh tack and invites a familiar theme from the Existential-Humanistic perspective. Long out of drinking water, his body dehydrated and exhausted, in the dark of night and all hope lost, Our Man sees the light of a distant boat. A possibility to resolve his crisis is presented. Great! But now, how to attract the boat’s attention?

It might sometimes happen that the very means we’ve been using to make things work out must be abandoned in order to get on with life, to thrive, or to live with fullness. It can be a frightening moment, facing the decision to abandon what I’ve long cultivated for the purpose of keeping things under control or to make my life work out. But sometimes that abandonment is necessary in order to move forward. Some have called the decision point that I’m writing about an “existential crisis” – a time full of possibility for life-change. As James Bugental wrote, “Simply but starkly conceived, what must occur is for one or more ways in which the client has been in her life and in her world to die in order for newer and more healthful and authentic ways to emerge.” Bugental’s use of the word “die” may seem dramatic but it captures the depth of the crisis and the necessity for changing “the way I do life” – the combined effects of my self-world constructs and my favored protective means.

And so – Our Man sees the light of a distant boat! Yes! A possibility for going on after all is lost. Our Man realizes that a signaling light is what’s needed. He has matches, he has paper, but he needs a container in which to make a fire on his vinyl emergency raft. A carved-out 5 gallon plastic water jug comes to hand and a paper fire soon casts a soft flickering light. But quickly the fires grows brighter as the plastic container catches fire, and then – the raft itself! The fire rages high, bright, and mighty as Our Man leaps from the flames into the water.

Like the life-change in an existential crisis, Our Man has to destroy what he’s been counting on for life preservation in order to save his life. A kind of dying occurs so that he can live and thrive. In this dramatic act, Our Man is transformed from a raft-dweller to a swimmer and in that liberation moves onward with life. The life-preserving raft is in flames but a signal has been sent bright and clear into the dark night. His crisis can be resolved. 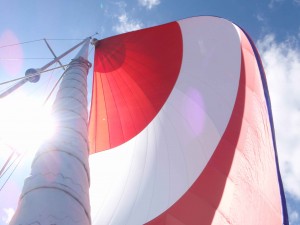 I won’t give away the ending of the film just in case you haven’t seen it.

I recommend seeing “All Is Lost.” The film is full of oceanic beauty, the music is equally beautiful, and Robert Redford does a masterful job of bringing Our Man alive with almost no spoken words. I love sailing and the ocean so this was a must-see film for me. But even if you’re not a sailor it’s a beautiful film, well worth seeing and the portrayal of existential themes is rich and enjoyable as well. Enjoy!